Understandings of abuse, as many ideas today, are shaped by globalisation, a term which can be said to be about the increased interconnectedness of parts of the globe. This interconnection is visible culturally, as ideas are shared around the world; these might be political and social ideas (such as democracy or equality) or they might be ideas and narratives (stories) that are contained in films, social connections and friendships and ever-increasing world travel. From the famous golden arches of MacDonald’s, to concepts such as human rights, in contemporary societies cultural symbols and ideas can travel quickly and easily, to be adopted around the globe (Lee-Treweek 2005). 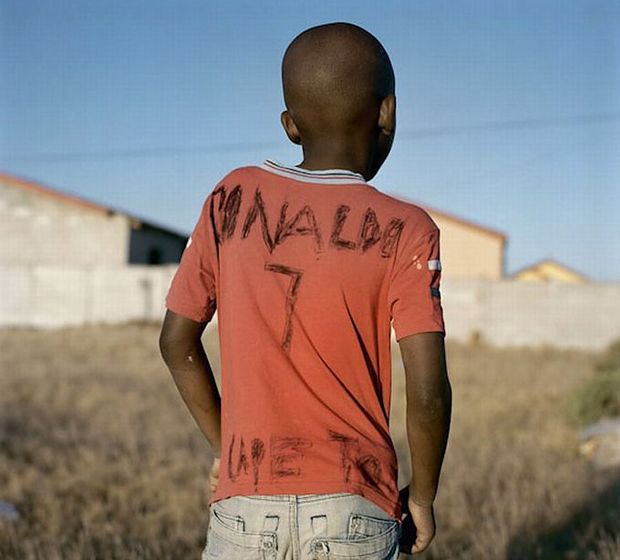 Youth in South Africa with a self-created ‘Ronaldo’ football shirt.

The child in the picture above, who was photographed in Cape Town, Republic of South Africa, is wearing a shirt he has customised with the name of the footballer Ronaldo, who is a Portuguese national who plays for the Italian club Juventus. The influence of international sports people and clubs are visible the world over, as are all the iconic images and brands of football and other sports. These influence young people all over the world through processes of globalisation and shape their aspirations, culture and the symbols and ideas that they believe are important. Globally, children and youth in places where they may have little contactwith costly brands, advertising and so forth, are often still aware of these through communications networks and they value these symbols and seek to be associated with them.

Globalisation also has a core economic impact on us all, as our lives become intertwined with financial systems (such as the FTSE or World Bank); a worldwide integration of these systems has happened in the last sixty years, interconnecting the finances of individuals and diverse economies (Economics Online 2018). Think, for instance, how many people have a Mastercard, which originated as a concept and financial tool in the USA. This card was launched by several Californian banks as a competitor to the Bank of America card, gradually expanding its hold over the market across the world. Indeed the MasterCard was the first credit card to be offered in the People’s Republic of China in 1987 and now is commonplace worldwide (Brandcenter Online, no date). On a more practical level, world economics typically tie individuals, communities and societies into to a global market place, with clothes, food, electronic items, cars and so forth, being manufactured and shipped from other countries or being designed and developed by foreign manufacturers. Third, globalisation interconnects human societies today because of the communication technology that virtually links them, from the telephone, to mobile networks, the Internet and the so-called Dark Net and, travel technology, such as air travel, that can take us from one place to another swiftly. This facility for rapid movement and virtual engagement is also open for use by abusers and organised criminal gangs. As globalisation has increased, it has enabled forms of abuse to be perpetrated in one place, filmed and used as a product by a ‘consumer’ in another. Abuse has become saleable, lucrative and easily carried out in some regions or countries of the globe, where there is poor regulation of crime, support of victims and criminal justice consequences for perpetrators of abuse.