Serbia is located in the central part of the Balkan peninsula. Its population excluding Kosovo is 7.15 million (2011 Census). Migrations are a significant socio-demographic phenomenon in Serbia. In the 90’s Serbia became major destination for numerous refugees from ex-Yugoslavia break-away republics (Slovenia, Croatia and Bosnia and Herzegovina). During the war in Kosovo in 1999 more than 200,000 people flied to Central Serbia and stayed until today bearing the status of the internally displaced persons (IDPs). Since 2015 and emerging of the so called Balkans migration route, Serbia has been the transit country for refugees and economic migrants from Middle East and Africa that are crossing the country in order to reach their final destinations in Western Europe.

Data about migrations in Serbia is collected in accordance with the Regulation 862/2007 of the European Parliament and the Council on Community statistics on migration and international protection [1]. 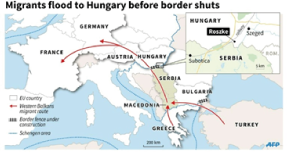 Balkans migration route stretches from Grece, over Macedonia and/or Bulgaria, to Hungary and Croatia towards Austria and Germany as migrants final destinations, placing Serbia in the middle of this corridor. In 2015 the total of 579,518 migrants comming from the Middle East and North African countries, registered as asylum seekers[2]. Out of this number, 313,335 were adult men, 92,188 adult women, and 173.284 children and youth. Majority (52%) were from Sirya, 28% from Afganistan, and 13% from Iraq.

In comparison with 16,500 asylum seekers that registered in 2014, this is a significant increase.

Out of the total number of those registered as asylum seekers, only 0.1% sougth asylum in Serbia while others said they plan to seek it in Western Europe. Final traveling destinations of migrants passing through Serbia are mostly Germany and Austria. In Serbia, migrants stay for the period of several days up to several months, i.e. as much as it takes to organize the continuation of their journey to the EU, and passing the border with Hungary and Croatia.

Returnees on the basis of the Readmission Agreements

In 2015. the total of 4,974 Serbian citizens were returned to Serbia on the basis of the Readmission Agreement between Serbia and the EU. Out of this number ¾ were from Germany.

Looking at ethnical structure, 82% of the returnees are Roma whereas 10% are Serbs.

Most of them regulated their residence status on the basis of the work permit (KIRS, 2015).

Refugee – a person fleeing armed conflict or persecution. Their situation is often so perilous and intolerable that they cross national borders to seek safety in nearby countries, and thus become internationally recognized as “refugees” with access to assistance from States, UNHCR, and other organizations. They are so recognized precisely because it is too dangerous for them to return home, and they need sanctuary elsewhere. These are people for whom denial of asylum has potentially deadly consequences.

Migrant – a person choosing to move not because of a direct threat of persecution or death, but mainly to improve their lives by finding work, or in some cases for education, family reunion, or other reasons. Unlike refugees who cannot safely return home, migrants face no such impediment to return. If they choose to return home, they will continue to receive the protection of their government.

Immigrant – a person coming to live in a foreign country for a period longer than 12 months.

Asylum seeker – a foreign person who submits request for asylum on the territory of the Republic of Serbia and on whose request final decision has not been issued.

Internaly displaced person – a person urged to leave his/her place of residence as a consequence of war or in order to avoid the effects of an armed conflict, general violence, violation of human rights, natural catastrofies, or human factor hazards, but who did not cross internationally recognized state boundaries.

Readmission – the process of return and acceptance of persons who do not, or no longer, fulfil the legal conditions for entry to, presence in, or residence on the territory of another state. Readmission procedure is carried out on the basis of the signed agreements on readmission between the countries.

Returnees based on the Readmission Agreement – persons who have been returned or who returns, and it was determined that such person is the citizen of one of the Contracting Parties. It may be:

Youth work in Serbia is defined as [3]: such youth activities organized by and for young people, based on non-formal education, carried out in young people’s free time and undertaken with the aim of improving the conditions for personal and social development of young people, in accordance with their needs and abilities, in which young people voluntarily participate;

Youth work in Serbia is grounded on the following 3 principles:

Youth worker in Serbia is defined as [4]: a professional affiliated to a NGO or other institution implementing youth work activities, and whose competences are defined by professional standards in youth work.